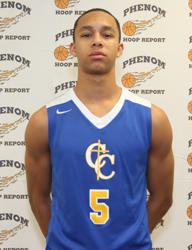 His time has come

During the Phenom Hoop Report open gym tour, we stopped by Carmel Christian to check out the 2017-18 roster. While the likes of Donovan Gregory, Miles Pierre, Martin Maide were the more well-known names, we wrote the following about 6’3 ’20 Ford Cooper. “We have seen Ford for quite a while. He has attended our Phenom camps and his game keeps getting better and better. Ford has good length, athleticism and an advanced skill set. His time is definitely coming!”

Fast-forward to today and we can now say, “his time has come.” In the so called “upset” win over nationally ranked Christ School at the Phenom National High School Showcase, it was the play of Ford Cooper down the stretch making some big time perimeter shots that sealed the deal for Coach Byron Dinkins and Carmel Christian. As of today, Carmel Christian is now 4-0 and one of the key players for the well coached and disciplined team has been the Ford Cooper. In the four victorious games, Cooper has seen an increase of playing time and “on court” confidence. He is now averaging 9.25 PPG and 4.7 APG. Throughout the past, Cooper has always had a reputation of being a shifty and crafty player that could score from all three levels on the court. He has the ability to handle pressure and has shown poise and maturity in his decision-making ability.

So far, this season, Carmel Christian has impressive wins over Christ School, Lee-Huntsville, Carolina Day and Asheville Christian and the play of Ford Cooper has definitely been instrumental in the team’s success. Only a sophomore, Cooper’s game has expanded and we expect his role will continue to expand.

For Carmel Christian, Coach Byron Dinkins has done a masterful job of getting his team to buy into the “team first”approach. There are many interchangeable pieces and all the players understand team success will equate into individual success and Ford Cooper has quietly waiting his time and his time has now come.