Phenom’s Capital City Jam is the Place to Be …Here’s Why (#1 Ranked Wilson Vs. #1 Ranked Dorman)

For the previous three years Phenom Hoops held this event at Millbrook High School in Raleigh, North Carolina. Players such as Dennis Smith Jr (Dallas Mavs), Chris Clemons (NCAA 2nd Leading Scorer) and many others have participated in this event. This year we felt it was time to move the event to talent rich Columbia, South Carolina.

While the Hoop State continues to be good to Phenom Hoops, the talent level in the state of South Carolina is at an unbelievable high right now. Going through the players there are numerous Top 150 type guys throughout the classes. Some of the top teams from around the region with incredible coaches throughout the state. South Carolina is also a basketball hungry state. The state knows when there is good talent around, they have to show up and watch.

Phenom’s Capital City Jam is filled with talent, both team and individual. Here is the reason why THIS Saturday (December 16) the state of South Carolina needs to stop what they are doing and show up to Ben Lippen School in Columbia and watch this incredible display of talent.

#1 ranked Dorman vs. #1 ranked Wilson
5PM at Ben Lippen School in Columbia, SC
A prominent person in South Carolina basketball told us last week that this matchup is the one they’re most excited to see all year because the general consensus is these are the “best two public teams in the state of South Carolina.” Having watched them both, and seeing their talent, that may very well be the case. 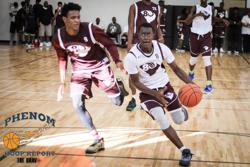 The South Carolina Basketball Coaches Association (SCBCA) has Wilson High ranked as the #1 4A team in South Carolina. The Florence, South Carolina high school has won 24 of their last 25 games (dating back to the start of last season) and has a roster filled with college level talent.

They are led by incredibly exciting point guard Alex Caldwell who had 10+ offers to chose from before committed to SE Missouri of the Ohio Valley Conference. But as exciting as he is, Caldwell is far from a one man show. 6’4” junior Allen Williamson is a sharpshooter when his feet are set and has good athleticism and length. Williamson carries an early offer from South Carolina State with more sure to come.

In the paint, Wilson has a pair of scholarship carrying unsigned seniors. 6’7” unsigned senior Jamonty Williams carries offers from Lander, Coker, Johnson C Smith and Lees McRae. He has quickly become a priority recruit for higher level D2 programs. 6’9” unsigned senior Ryan Carfley parlayed a big summer playing with Garner Road on the Adidas Gauntlet into an offer from Coker. He is on the list for many other high D2 and low D1 programs and rightfully so as he is a true low block player. 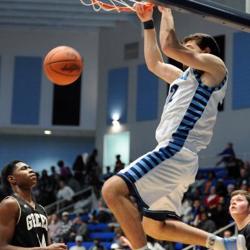 The SCBCA has Dorman High ranked as the #1 5A team in South Carolina. The Roebuck, South Carolina high school is carrying a 17 game win streak right now. The defending 5A state champions have a roster full of high flying and exiting prospects and they are riding an all-time high on confidence.

Dorman is led by super sophomore Myles Tate, who is leading the team in scoring and assists this year. Tate is the second ranked prospect in South Carolina’s 2020 class and should be on the recruiting radar of mid to high major programs across the country. 6’9 high flying senior Gabe Bryant carried 15+ offers when he decided to commit to Gardner Webb. Make sure the rims are screwed tight as Bryant is ferocious around them.

6’8” sophomore PJ Hall comes from an athletic family as his sister is the country’s top ranked volleyball player in the 2018 class. His mom and dad also played Division 1 basketball. Hall carries early offers from Wofford and Presbyterian. 6’2 unsigned senior Ethan Parton is the glue who keeps everything together. He plays mistake free basketball with the ball in his hands and he shots the cover off the ball, spacing the floor from range.

This game is filled with college level talent. The rosters are bursting with unbelievable athleticism and exciting players. They are said the be the best two teams in the state and are expected to go through this year and win their respected state championships. Without question, this game is the biggest one so far to take place in South Carolina, between South Carolina teams. Show up and show up, these two teams will.