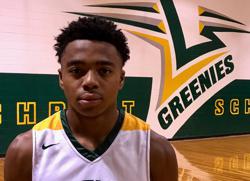 If you got there after tip-off you were already four or five rows back. Every one of the 750+ fans and 34 teams who were in Proehlific Park wanted to catch a glimpse of Jalen Lecque. The fans were packed in and the video cameras were rolling and the ooh’s and ahh’s quickly ensued throughout the duration of the game, as Lecque did not disappoint.

College coaches from the Big 12, SEC, ACC were strewn throughout the crowd and statements like “he’s special” and “he’s a pro” were littered throughout his games from the area where the coaches were watching. Again Lecque did not disappoint them either.

Rightfully so, Lecque came into the event with a heavy reputation that was built this summer playing with the Southern Stampede on the EYBL. He was a little know player outside of his area in New York, where he attended Monsinger Scanlan High School. He came down south and immediately the videos started circulating and the scouts started talking. EYBL event after EYBL event the legend started growing.

Lecque came into Phenom’s High School Jamboree ranked as the number ten player in the 2019 class by 247Sports. He carries close to 40 offers from every school imaginable across the country. However, with his move to a new region and the rapid nature in which his reputation grew, there are still a lot of people who have not seen Lecque play.

Lecque plays the game with a great pace and is extremely comfortable in the pick and roll set. He makes great decisions with the ball as he takes a minimalistic approach to getting downhill. He made shots at all levels and really got the crowd into a frenzy, on multiple occasions, as he got above the rim and finished (viciously) in traffic.

After watching Lecque earlier this year National Analyst Rick Lewis wrote, “Jalen’s national reputation is for real! Without question, Jalen will be in the conversation as one of the premier and elite level points guards in the country. We’re talking about a talented, athletic, and explosive point guard that also has a matching skill set. He has all the ingredients; intangibles and attributes to play at the next level after his collegiate days are finished. While Jalen can score at will, he is also a willing and creative passer off the dribble.”

Overnight Lecque’s thunderous dunk highlight caught by Elite Mixtapes (see below) has received 10,000 views. It was a thunderous dunk, on a contesting player, taken off of one step. The crowd went crazy, it was loud. Not only were they excited to watch a future NBA player, they were exited that basketball season was finally here.

Lecque will be playing in Greensboro again next week at the 4th Annual Phenom’s National Showcase. This event is the official kick off to the high school basketball season with some of the best players from across the country, and Canada, competing against one another.